It was easier to slay dragons back during the Crusades, but a treaty forged with blood strengthened their protections.  In return, humans grew prosperous and plentiful, while the dragons grew powerful.  Integrating into human society, dragons were revered as warlords and statesmen and as time marched on, celebrities and CEOs.

When the cult of humanity sacrificed a dragon Queen to break the treaty, they crippled the breeding process. A female hasn’t been hatched or shape shifted in over a thousand years. With the dragons looking extinction in the face, they are desperate for females.  Only five Queens remain, each more corrupt and sinister than the other.
Free Prequel to The Emerging Queen's series:
The Queen's Mystery
In this prequel to USA Today bestselling author Jamie K. Schmidt's The Emerging Queen's series, Bianca is a human with a problem.  She just landed her dream job of working as a dragon-human liaison at the Smythe Corporation, but for some reason dragon studs keep following her around.  When Niall, the All Knowing, a golden Celtic dragon sends her to get a rare book written by the Order of the Dragon Slayers, Bianca is stunned by her attraction to the esoteric book store owner.  Byron is a dragon who is still mourning his long lost Queen.  The fact that Bianca's scent reminds him of his only love is enough to intrigue him, but when the Order of the Dragon Slayers take her away from him, it brings out the protector in him and he'll stop at nothing to get her back.
Amazon
Everywhere Else 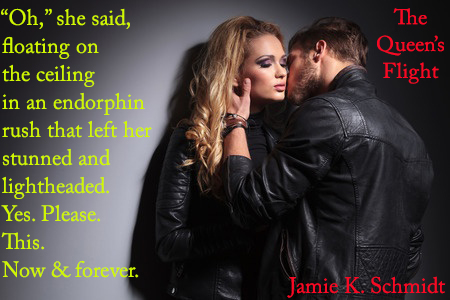 It was chilly standing in line to get into Yarn Barn Crafts.  Viola stamped her feet to get some feeling back into them.  She was bundled up like that kid in Christmas story, only she could move her arms.

“This is ridiculous,” Sergei bitched in her ear.

“You are a dragon Queen.  If you only let me, I would have had the store open hours ago for a private viewing.  Hell, you could just tell me what you want and would buy it for you and to hell with the price.”

Sergei looked around, probably to make sure no one was eavesdropping on their conversation.  He made her go all the way to upstate New York to make sure no one would recognize them.  The paperwork alone to allow her to enter Queen Arianna’s state was nauseating and she had to knit her a scarf for tribute.  That part wasn’t so bad, and she made Justice do the paperwork.

“I could probably buy you the entire store.”

Viola huffed out a breath of white smoke.  Since she didn’t have a breath weapon, having her words condense into fog was the closest she got. “What’s the fun in that?”

“What’s the fun of this?”  He indicated the sleepy shoppers, sipping coffee from Thermoses and leaning against the building.

“Can’t you feel the anticipation building?” she asked, looking up to the sky.  Maybe it would start snowing.  She was feeling homesick for Greenland, of all places.

“Well trust me, it is.”  At his sour face, Viola continued. “It’s either this or we go out looking for Queens in trouble.”

“They come to you.  You don’t have to go looking for them.”  He frowned down at her stomach.  “Are the babies cold?”

“No.” She shook her head.  “They’re nice and toasty and will be for the next four months, so don’t try using my pregnancy as an excuse.”

Sergei looked around.  “I don’t want to have to kill anyone today.”  He forgot to lower his voice.  Or did he?  A few customers backed away from them.

“It’s good to have daily goals,” Viola said, patting his arm.  “Here, hold my coupons while I look at the flyer again.”

He stifled a groan.  “Don’t you have that thing memorized yet?”

“I want to make sure we get all the door stopper deals.”  She rattled the paper at him.

Just then, the doors opened and the crowd pushed forward.

“Don’t get separated from me,” Sergei warned, tugged the knitted hat she made him over his ears.

“Keep up,” she said, stuffing the ad in her pocket so she had both hands free to stock up on yarn.

Bypassing the line that formed for the free doughnuts and coffee, Viola eyeballed the mini doughnut maker on the way by.  “We should get that.”

Sergei grunted and used his height advantage to snatch one off the top shelf over the heads of the customers looking to get it off the display table.  When he thought she wasn’t looking, Viola saw him grab a couple of bags of chocolate candy melts.  She liked where his head was at.  That would make a nice coating for the mini doughnuts.

But what she was really here for was the large bumps of yarn whose strands were as thick as a garden hose.  There!  Up ahead.  Picking up speed, she dodged the Christmas ribbon people and managed to snag her hair on a plastic bird.  Not bothering to stop, she took it with her.

“Your hair is a bird’s nest,” Sergei said from behind her.  She felt him try to gently detangle it.

“I need ten bumps of the camel and ten of the buffalo.”

“Are we talking about livestock?”

“Go get a carriage or hold out your hands.”  Viola dug through the big shelving box of yarn.

“I’m not leaving you.” Sergei managed to pry the bird free from her hair.  “You’re covered in glitter,” he said.

“Figured as much,” he said and audibly stifled a sigh.

She tossed nine of the big bumps of yarn at him.  “I need one more buffalo.”

Sergei had four under each of his arms and one under a chin.  “Hey lady,” he asked a woman looking at the candle making supplies.

She looked up, noticed that the big biker dude was looking at her and forced a smile.

“I’ll give you fifty bucks for that carriage.”

Apparently she got over her fear of tattooed men in leather and hustled the cart over to him.  Sergei unloaded the large skeins of yarn and peeled off a hundred dollar bill and handed it to her.  “Keep the change,” he said.

“Bless you.”  The woman stood on her tiptoes to kiss his cheek and practically skipped to the front of the store.

“That was so nice.” Viola hugged him.

“My arms were getting tired.  Don’t read anything into it.”  He crossed his arms.

“What are you planning on making?”

“I was going to knit you a sweater.”

Sergei looked in the cart.  “Why do you need twenty skeins?”

“For your dragon form, silly.  I guess we’ll just have to hit another store.  There’s one in Albany.  We can fly there if you’d rather not drive.”

“I’m not carrying shopping bags in my talons,” he gritted out, pushing the carriage to the long line.  It was fifteen people deep. “Oh for fu—”

Viola clamped a hand over his mouth.  “There are children present.”

Sergei rolled his eyes.  “I’ve got twenty bucks for everyone who lets us go ahead of them,” he shouted when she removed her hand.
He had a few takers.

“You don’t have to knit me a sweater. Dragons don’t wear sweaters,” he whispered back.  “Make a blanket instead.  That’s enough yarn.”

“Blasphemer.  There is never enough yarn.”  Viola didn’t like the calculating look in his eyes.  It meant he was thinking up something devious and probably irresistible.

“Why don’t you knit me a bike cozy for my new Hayabusa?”

She put her hand to her chest in shock.  “I didn’t know you even knew the word cozy.”

Viola wasn’t born yesterday.  “What’s in it for me?”  She crossed her arms over her chest.

“I’ll buy you a Hayabusa of your own and we can take a road trip to all the Fiber Festivals next year.” 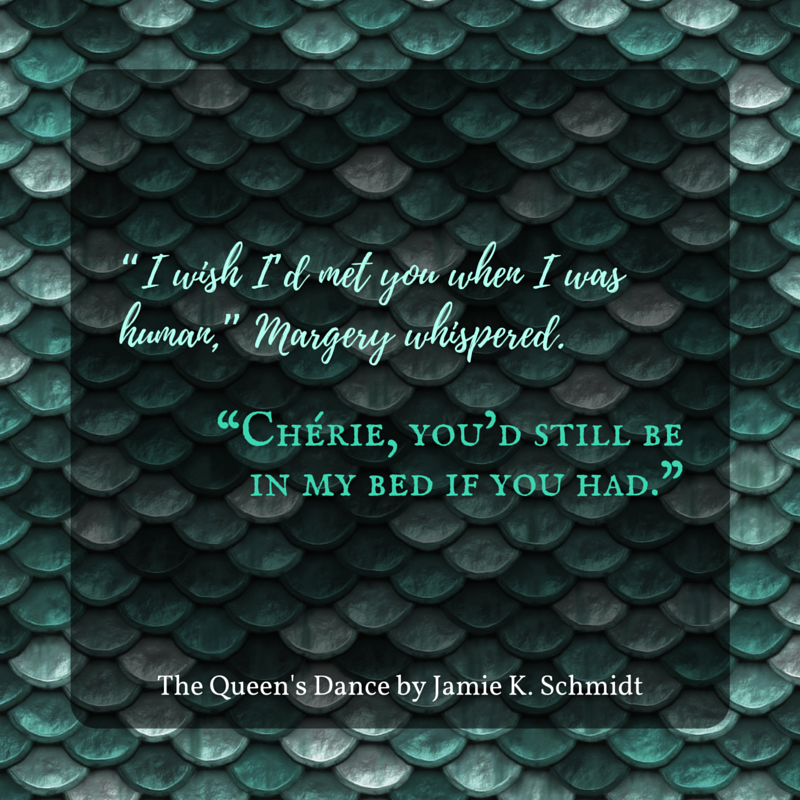 Queen Margery, the heroine of The Queen’s Dance, spends some of her time in the lovely state of Vermont.  There’s plenty to pamper yourself there.  Lake Champlain chocolates and pure maple syrup.  Not to mention all the tasty cheese samples at the Grafton Village Cheese Shop.  But what really floats Margery’s boat is tea. Here are Queen Margery’s top five favorite teas and tisanes:So now that you have your books, your warm knitted garments and a cup of tea, you can continue to pamper yourself in a Queenly fashion by having all those dragon studs that you control give you a foot massage.  If you do that, you may want to have them whip up this recipe to use.

Queen Margery’s Green Tea and Peppermint Foot Soak
1 cup of Epsom salt
1 cup of baking soda
2 tablespoons of coconut oil (You can also use almond oil or sunflower oil.  Even olive oil will do in a pinch)
5 teaspoons of green tea.  (Margery says, if you have the bagged kind, cut open 5 bags and dump the contents into your container.)
15-30 drops of peppermint essential oil

Dump all the ingredients but the oil in a quart size Mason jar.  Shake to combine.  Drip in ½ of the essential oil.  Shake to mix together.  Test the scent.  If it’s too much add equal amounts of Epsom salt and baking soda.  If it’s too faint, add the rest of the essential oil.  Fill up a basin with the hottest water your feet can stand to be in comfortably and then add in ¼ cup of the mixture.  Soak for ½ hour or until you get through a few chapters of that book or a few rows of that scarf.  Then put on some thick, cotton socks to keep in the freshness.
Now, it’s time to get on the massage table and have one of your handsome dragon studs rub out all the aches and pains from your body.

Queen Margery’s Earl Grey Massage Oil
½ cup of the carrier oil of your choice.  (Sweet almond is Margery’s favorite, but you can also use grapeseed oil or coconut oil.)
2 Earl Grey tea bags
​
Pour the oil into a Mason jar and drop the tea bags in so they’re submerged.  Put the cover on and leave them it out in the sun for an afternoon or out on the counter for two or three days so that the Earl Grey steeps into the oil.  Then remove the tea bags before use.

¼ cup of carrier oil of your choice (Coconut, Almond, Grapeseed, or Olive oil would all work well in this recipe.
Mix the sugars and the lemon zest/peel together in a large bowl to combine and then add in the drops of oil.  Use more or less depending on your scent preference.  Spoon into a pint size Mason jar and add in the oil.  Stir until it’s well blended.  You want it to be clumpy and not too wet.  You can always add more oil if it is too dry.
To use, rub on dry skin and rinse with hot water.
​
It works wonders on Queen Margery’s scaly skin!

The Emerging Queens -- so far

Before the events in The Queen's Wings there were only five female dragons left in the world. They are referred to as The Old Queens and held the following territories.
Cassandra -Ireland, Scotland, & Wales
Lerisse - France, Italy, India, & Africa
Esmeralda - North & South America
Choyo - Saudia Arabia, Indonesia, Japan
Hui Zhong - Russia & China

​The unattached studs
Casimiro - A famous Latin singer, this dragon shaman can seduce human women through his magic.
Niall - The Great Wyrm of Yale spends most of his time in his research and hasn't a preference to play the Queen game -- for himself anyway.  He's very interested in seeing his sons, Reed, Byron and Fontaine, happily settled.
Rathin - Indian prince, Rathin has a fine museum and spends his time collecting artifacts and finances archeological digs. 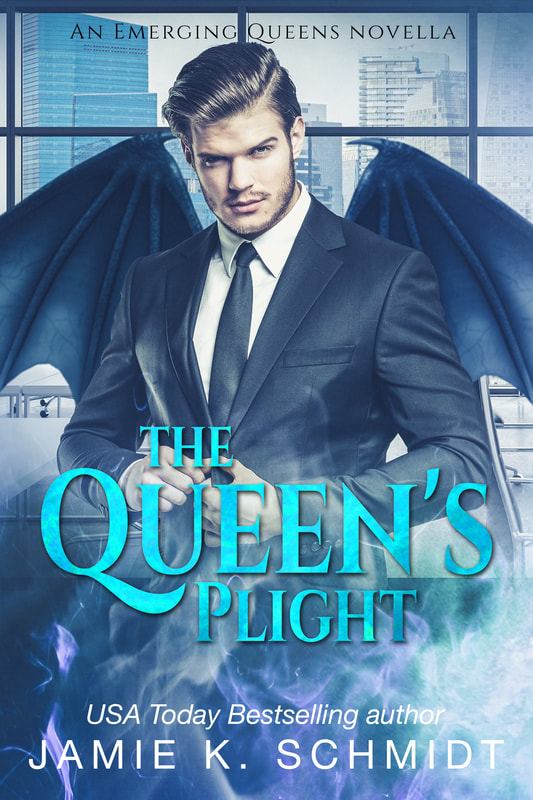